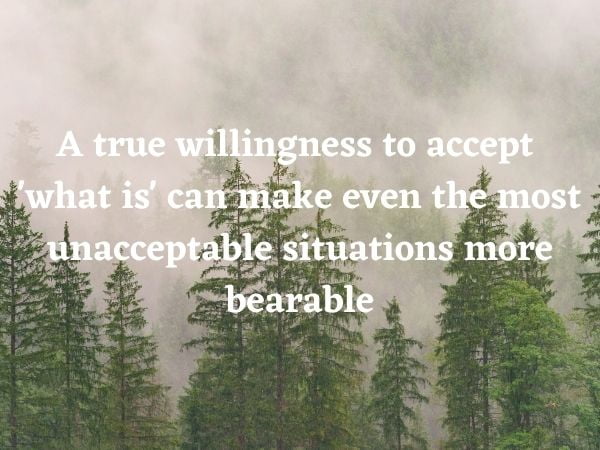 One night in April Ryan and I were taking a walk pretty late and saw a deer get hit by a car not more than 20 feet from us. I have never actually witnessed something like that and it was upsetting to say the least.

As she limped off to the side of the road, clearly very badly injured, I felt this overwhelming sense of powerlessness; I felt so terrible thinking she was suffering and I couldn’t do anything about it. I wanted to go comfort her. (Of course I was doing major projecting onto her as we are wont to do with animals.)

We called the police in case there is something they do to handle it but I don’t know what ever happened.

I felt this was a significant event for me, it was serving as a powerful reminder I would need, an opportunity to more deeply contemplate, and embrace, wisdom meant to improve our lives and emotional health.

And I was right about that. The very next day my mom went into the hospital. Her cancer had been progressing and she was having certain symptoms that clearly needed medical attention.

The last year of her life was one of great suffering between the cancer itself, and the side effects of various treatments, and it seems I am feeling the pain of witnessing that more deeply now, five months after her passing, than I ever had.

She went into the hospital during the height of Covid, so I was not able to visit her and she spent the last month of her life (save one day she came home and then ended up being readmitted the next day because she was still clearly very ill) alone in that hospital. It was devastating for me, especially after she tested positive for the virus—I knew it was the beginning of the end. She was never coming home. In the world outside the hospital, she was already gone.

I felt powerless and helpless. After taking such an active role in her care, and being by her side for pretty much everything, I had no choice but to let her go that last leg alone.

It was just how it had to be. I couldn’t do anything to ease her suffering. I could no longer try and take control of her health or persuade her to do things I thought she should be doing. It was all over, the end was in clear sight– no more treatments, no more hope.

The day before she died, the nurse arranged a video call with her; she was coherent and I was able to have a conversation with her. She asked if I missed having her at the house and I told her I missed having her tell me about the ridiculousness of the characters on 90 Day Fiance. At that point, I hadn’t been told she had so little time, but I just knew. I think she knew too but was trying to keep a brave front, telling me she was going to come home.

I am grateful I was able to visit her and say goodbye  (originally the doctor said only one person could come and I told my sister she could go.)That I couldn’t actually be there the moment she passed was hard. It was surreal leaving that room knowing with certainty that would be the last time I saw her, that she would die very soon.

Having that trust and faith things turn out exactly the way they are meant to–even if we don’t like the outcome, or can’t possibly see the rhyme and reason–can help you get through even the most horrible of experiences, the things that seem absolutely senseless.

We don’t have to accept these ideas with our mind–it never really will–but only in our heart. This is where we connect with all we know to be true. This is where we connect, and draw strength from, that part of us completely untouched by the troubles of our life, that is perfectly whole no matter how broken we feel, that sees things as they really are.

Being able to accept ‘what is’ no matter how unacceptable it appears to be is one of the most important life lessons we must be willing to learn–to resist it is to our detriment since there will always be things happening we won’t like, both big and small. To constantly be in ‘push back’ mode against situations we may not be able to do anything about is a huge waste of energy and no way to live.

Resisting ‘what is’ adds an extra layer of suffering to experiences that are already incredibly painful for all but the most enlightened beings.

True peace will only come from changing our perspectives and beliefs, the only thing over which we have any real control.

My Biggest Life Lesson in Accepting ‘What Is’
Spread the Love!

10 thoughts on “My Biggest Life Lesson in Accepting ‘What Is’”

Sign up today for this free audio course, new content notifications, thoughts for the day and special offers just for you!