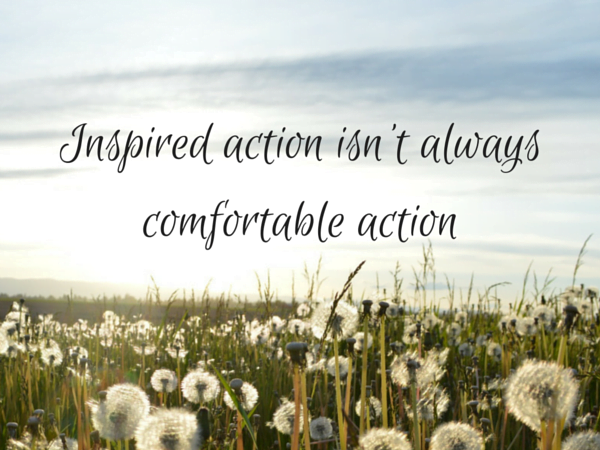 It is a wonderful feeling when we act based on an intuitive nudge and then something wonderful results.

Because we are very action-oriented by nature, our mind can really zero in on this piece of the manifesting puzzle. When that inspired action doesn’t seem to be making itself known, this doesn’t sit very well.

Today’s post focuses in on this issue, and was inspired by the below question from one of my awesome readers:

The “inspired ideas” thing. Like, for me…I can have 3 or four days straight of feeling super high energy (from doing all the inner work) and I go about my day, but I never get any “inspired ideas” during that time of feeling good, that may bring about a solution to any shit in my life. In the moment I don’t seem to care….as I am feeling good and that’s the point….but when the heaviness comes back I notice that I hadn’t gotten a single inspired idea. So what would a person do if they are feeling good and going with the flow….but no “inspired ideas” show up? Does it mean that those ideas are not relevant or important in means of presenting a solution to any of my problems?

You mentioned that when you are feeling good, the ideas, and inspired actions will present themselves….but I don’t seem to get any. So then my brain says, “Well I guess it’s up to Me now, to figure out a plan since the universe isn’t offering us any ideas!” That’s usually when I start feeling bad, because my brain’s “plans” never end up working out that well. I’m trying to go with the flow. I’m breathing consciously. I’m meditating and relaxing the best I can. I’ve adopted the “I’ve put in my 2 weeks at work” mentality. All of it is good. I just haven’t gotten any inspired ideas….and nothing has manifested either…..so my brain tries to take over again. I’m pretty patient….but every 6 or 7 days of “going with flow” and being “idea-less”…..well, you get the picture.

We’re Very Used to Being Motivated By Pressure

This idea of acting from inspiration, doing what feels good, being guided by our higher self, inner wisdom, or whatever your preferred term, is a really new way of operating for most of us.

In fact, there is a good chance you may never become 100 percent comfortable with this sort of relationship to action at all times. After all, your mind will never stop operating as it does. You just get better at not listening to it, or being as affected by its ‘opinions’ as much.

We are much more used to being motivated by pressure. We feel badly and we must take some sort of action to ‘fix’ the problem. Something is not going right and we need to figure out how to correct course.

We criticize ourselves and point out all the ways in which we are fucking things up, and this is supposed to be a good motivator to do things differently, to make improvements.

Basically, our bad feelings serve as the catalyst to make some sort of change. At the beginning, this is what usually motivates us. That sense of contrast is helpful for allowing us to figure out what sort of experiences we prefer to have.

But beyond this point, using negativity as the motivator, feeling pressure to figure things out and make a change, fighting against what is, etc…doesn’t gel very well with deliberate creation.

And that’s okay. You just have to muster up a bit of faith and trust in how the process works, and know that if any sort of action will enhance your life, or help move you towards the things you want to manifest, it will make itself known.

We have to make some ‘space’ for these sorts of actions to reveal themselves, and there is probably some stuff cluttering it up that has to be looked at first. That is where your attention may need to be.

Our Feeling Good Tends to Have an ‘Ulterior Motive’

This is something I talked about in a recent post but it is really relevant to this topic, and I am sure that we could use a nice reminder so I will discuss it again. We want stuff; it’s okay to want stuff; we’re here having a physical experience and I think there are some things that most of us are going to want and it’s okay to want them, like money, relationships, fulfilling careers,etc…

That we are doing this work with the goal of manifesting specific things is okay; that we still haven’t fully embraced the idea of working on our energy to achieve just feeling happier overall (which is what we really want at the end of the day and is the fastest route to the specific things showing up by the way) is okay and understandable.

I get that it can be hard to maintain that higher vibe when things still aren’t going your way, or when you still have to deal with the unwanted. I’m a fellow human, believe me I get it. And as a little side note, that super-high energy is not really the key in my experience, it was dealing with my shit in a meaningful way, which isn’t always fun. But I digress…

I know you got into a teaching like the law of attraction because it seemed like the answer to all your problems; your mind saw it as a wonderful tool to manipulate reality just to its liking.

But the issue with operating from this space is that our efforts at trying to ‘feel good’ will always be thwarted by a variety of issues, from things not turning out the way our mind wanted them to our reality not changing as quickly as we would like. And this makes it hard to build any real momentum behind this energy.

If this is where you are right now, it’s cool but you have to be prepared for the fact it’s going to cause you a lot of frustration. I think this is something we all go through and it can take awhile before we really start changing our tune. But back to the issues with this modus operandi….

Our happiness will always be conditional; we will always be looking to see if what we are doing is ‘working.’ These good vibes will be very hard to maintain unless we manifest things that give us a ‘reason’ to continue to keep feeling them.

So all that ‘positive’ energy is competing with the deeply rooted beliefs and feelings that are too uncomfortable to look at, and have a lot more weight behind them.

In this case, we are working on feeling ‘good’ so the inspired actions reveal themselves. The person that asked the question noted waiting a whole six or seven days (the horror) for inspired action to strike, with the discomfort starting after a mere three or four. That isn’t to rag on him, he is certainly not alone in that.

Again, totally get the frustration. Been there, done that and will probably be there and doing that again many times to come. But you see what I mean about that ‘ulterior motive?’

Which brings me to my next point…

The biggest reason we are frustrated by the lack of ‘inspired action’ striking is because we are still operating from a space of trying to control our lives through action.

Action takes place on the level of ‘effect.’ Trying to force change here without working on our mind–the level of cause–will usually have limited effectiveness.

By fixating on inspired action, we are still looking to change through ‘doing’ and if we haven’t figured out what to ‘do’ yet, this makes us very uncomfortable.

And us getting all bent out of shape just further delays the variety of manifestations that can help move us forward, give us the clarity we need, provide the solution to a problem,etc…

There may be a good chance that the issue at hand may not even require a particular action on our part, and we’re getting our panties in a bunch for nothing.

This desire to control is not something we are going to give up overnight or maybe ever; but even the slightest willingness to give it up, to believe it’s not all up to you, to believe the Universe is set up to support you, can invite in all sorts of possibilities that were waiting in the wings but could not make their way to you.

Spirit can make its way into even the smallest opening; it will excitedly RSVP to even the most lukewarm of invitations.

When you think of inspired action, you may have this vision of action that feels so overwhelmingly good and right, and you dive right in, tapping into ease and flow immediately.

There is no questioning, no hesitation, you literally can’t stop yourself from doing it. It is totally devoid of any ‘negativity.’ You do something and you immediately manifest something that makes you feel good as a result.

Inspired action is not always comfortable action; and it takes brutal honesty on our part to recognize when we are refraining from an action because our motivation to take it is from a place of trying to manipulate and control, or feeling like we ‘have’ to do this thing or because it just feels uncomfortable, but ultimately, it could really open things up for us, and get us moving in the right direction.

I know a lot of people are drawn to a teaching like the law of attraction because there is this idea that you can be totally passive in your own life, and you never have to take any initiative or do anything–you just think your happy thoughts and your whole life will change.

Yes, it is our energy that creates but we are not living some virtual reality existence; we are here in bodies and we are going to do stuff. Making certain changes in our life will require us to take certain actions, make certain decisions, change behaviors,etc…

Because we may never fully believe in the power of our energy over action, taking action can be a very powerful form of energy work because it helps create the expectation we can effect the changes we want in our life.

Obviously the key to that is trying our best to take those actions from as high an energy as possible, and releasing expectations about what we think we will ‘get’ from taking them.

So, are there actions you have been feeling inspired to take but have been refraining because it feels uncomfortable?

Are you really as stuck as you think you are, or is it kind of bullshit?

Are you delaying that first step that can really open things up for you because you can’t see the next 50 beyond it?

Are you still viewing the law of attraction as some sort of ‘tool’ that can magically change your life, that lets you off the ‘hook’ from taking any responsibility for your life or having to make any decisions?

What did you think of the post? Anything resonate in particular? Was there anything significant or particular you did to allow in inspiration? Looking forward to your comments as always.

Sign up today for this free audio course, new content notifications, thoughts for the day and special offers just for you!